Does Road Salt Cause Potholes? 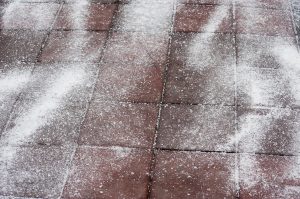 Winter is fast approaching and before you know it, you’ll find yourself stocking up on large supplies of deicing salt to protect your asphalt driveway, parking lot, or local roadways. Road salt may be an instrumental initiative when it comes to accident prevention during those harsh and cold Toronto winters, but it may be doing more harm than good. Many people attribute a lot of the road damage that occurs during the winter months to excessive use of road salt. While road salt certainly has been proven to have a vastly negative environmental impact if applied in large quantities, there’s very little evidence to prove that it’s directly linked to causing potholes.

Is Salt Bad for Asphalt?

Deicing salt, when used correctly and appropriately applied, isn’t actually harmful to asphalt roadways, parking lots, or driveways. However, overuse of it can negatively impact the environment. Some companies have chosen to mix road salt in with sand first and then apply it as a preemptive strike before a major expected snowfall. This saves the companies a great deal of money on materials, which benefits their customers because it means the cost of their services is usually lower. Secondly, it helps to decrease the size of their environmental footprints by lessening the saline content of runoff water after the snow melts. In recent years, researchers have discovered that toxic saline levels in our local water supplies and waterways is at an all-time high, making them uninhabitable for most of the local aquatic life. On top of that, it also makes it easier for foreign species that thrive in saltwater conditions to invade these otherwise naturally salt-free waters, which will eventually wipe out their natural inhabitants.

The only way road salt could possibly damage asphalt pavements is by inevitably mixing into the melted snow (water) and then penetrating the surface of the asphalt through pre-existing cracks. In fact, the biggest damaging factors for asphalt roadways in the winter time is the heavy volume of traffic that’s constantly weighing it down combined with the extreme polarizing temperatures.

Does Salt Cause Potholes?

So, exactly how does road salt damage asphalt, if at all? Well, road salt doesn’t directly cause potholes. However, it does exacerbate the damage to asphalt that’s already depleted due to a combination of cold winter temperatures, heavy precipitation levels, and the weight of traffic. Road salt, especially if applied unsparingly, significantly lowers the temperature of the asphalt even lower than it normally would be. Potholes occur when water penetrates the surface of the asphalt through existing cracks and erodes the pavement from beneath the surface. This is more likely to happen in the winter as a result of all of the above mentioned factors as well as the fact that road repairs and maintenance are nearly impossible in the winter. High saline content in the melted water can also cause faster underground erosion.

A Few Things to Consider Before Salting Your Asphalt Pavement

If used in the correct capacities, road salt can actually be quite beneficial to protecting your pavement from deterioration as a result of winter damages and it can even increase the lifespan of your driveway or parking lot. Always make sure to apply road salt sparingly before an expected snowfall. Of course, you can’t always predict when it’s going to snow, so the next best thing is to shovel and clear all snow from your property and then apply the road salt. This will ensure that the snow doesn’t have a chance to stick to the ground and prevents it from accumulating and freezing into ice.

While it’s certainly true that road salt and potholes don’t comingle well together, that doesn’t mean that the former necessarily causes the latter. In fact, if salt is applied in small amounts when the ground is still clear of snow, it could be an instrumental factor in the prevention of pothole formation. The reason for this is that salt, when applied before a snowfall, can prevent the snow from sticking to the ground and turning into ice. Once ice forms, it’ll eventually melt and the resulting runoff or standing water can break down the structural durability of your asphalt, allowing crack formation that can eventually expand into potholes. Road salt can exacerbate the formation of potholes, however, if it’s applied to asphalt that’s already in grave disrepair due to lack of routine maintenance.

Road Salt Is Harmful to the Environment

There’s no denying that road salt can have a tremendously negative impact on the environment. After all, it’s comprised of a number of harmful chemicals and toxins, many of which are consumed by animals, not to mention the fact that once the snow and ice melts, the resulting runoff water can sometimes end up in community water supplies. In fact, research has shown that a small percentage of all city water supplies contain trace amounts of the same chemicals that are found in road salt.

Consider how much road salt is applied each winter and now try to imagine where all of that salt goes when winter ends. It has to go somewhere, especially since a lot of it isn’t biodegradable. Aside from road salt being detrimental for animal and human consumption, it can also end up in our food supply through other means. Many plants such as grasses, flowers, and even fruit and vegetable crops can also absorb the runoff water that occurs as a result of melted snow and ice.

Does road salt damage asphalt? The short and general answer is no. However, under certain circumstances, road salt can worsen pre-existing damages to your asphalt. It contains a lot of corrosive and potentially toxic chemical compounds that can further aggravate damages and weaken the structure of the asphalt even more than it already is. Before you start applying road salt to your asphalt parking lot or driveway, it’s important to make sure that you administer all necessary repairs, no matter how minimal they may be. Keep in mind that the freeze-thaw cycle that happens frequently in the winter months can also affect the way your asphalt reacts to the chemical compounds in the road salt. That said, if salt is applied to asphalt that’s fresh or properly laid by an experienced contractor, then you shouldn’t have any issues with it.

Types of Ice Melts for Asphalt Driveways and Parking Lots

How do you determine what the best salt is for your asphalt driveway? The fact is that most types of de-icing agents and road salts are actually perfectly suitable for protecting asphalt driveways and parking lots, as long as your pavement is in good condition and has been well-maintained.

Here’s a list of the best ice melts for asphalt, how they should be used, and their merits.

Calcium chloride is one of the more commonly used types of ice melting agents because it has a high efficacy level at extremely low temperatures up to -50 degrees. This type of salt takes on little white pellet formations and it generates a great deal of heat that allows it to melt snow and ice.

Arguably, magnesium chloride is one of the safest ice melting salts that’s currently on the market and it’s also the latest development in the industry. Since it’s one of the safest de-icing agents, a lot of government facilities are beginning to use this type of road salt more than any other. It has the capacity to quickly melt snow and ice in about -13-degree weather. It’s advised that you wear gloves while handling this salt and apply it with great care, though, because it can easily irritate wet or damp skin.

Potassium chloride is another relatively safer salt to use for animals and humans, however it’s not nearly as effective as the others on this list. It’s often used as a source of potassium in most fertilizers for plants and crops.

Of all the road salts on this list, sodium chloride is the most commonly used one, despite the fact that it’s only moderately effective at melting snow and ice in colder conditions. The reason it’s so widely used, though, is because it’s the most cost-efficient type of ice melter on the market and this makes it easily affordable to most people. It’s commonly referred to as rock salt because of its thick, crystallized texture. Unfortunately, sodium chloride salt isn’t environmentally friendly, and the release of the chemicals found in it can damage your plants, vegetation, harm animals that ingest it, and it can even cause rust on the exterior of your vehicle.

Every year, CAA gives Canadians the opportunity to voice their opinions on what they think the worst roads in their respective regions are through their Worst Roads campaign. It allows Canadians to vote on which roads in their areas are highly neglected based upon a variety of factors including level of drivability, hazardousness, state of infrastructure, and how the damaged state of each road impacts the community at large. Here’s how the top five worst roads in Ontario rank, according to the most popular votes:

It’s not surprising that some of the busiest streets in Toronto are on this list, but there’s a reason for that. Not only are these roads under-maintained due to ongoing construction and heavy flow of traffic, but they also suffer the largest amount of damage in the GTA as a result. It’s not a secret that Toronto pothole repairs are currently at an all-time low and the city’s most populous roads are suffering the brunt of the damages because of it. The city has allocated millions of dollars to repairing these major roads, but unfortunately, until construction is complete and permanently ceased, there are no lasting solutions that’ll ensure the longevity of any repairs that are made. The most sensible short-term solution that can be effectively executed is to apply amalgamation of sand and salt to reduce the amount of damages caused by harsh weather conditions.

Pothole Repair Services in Toronto and the GTA

Fortunately, as a property owner, you’re only responsible for maintaining and repairing your own asphalt driveway and parking lot. When the time comes to start salting your asphalt pavement, let the experts at Sure-Seal Pavement Maintenance Inc. get the job done right for you. We’ll take the time to thoroughly examine your property and inform you if there are any imminent repairs that need to be made prior to salting your property. Our top priority is to make sure all of our clients are well prepared for the rough winter months and help you find the right solution to get you there. Contact us for a free consultation.